Chris Jones made this WONDERFUL video –

He posted it with the following instructions:

Over the last year there have been many news stories about fluoroquinolones. I made a video to highlight these stories. I am asking you all to please help me do a few things.

1. Watch it many times to get the view count up.

3. Leave a comment on it in YouTube. ( the news stories comments helped a lot, but once the story is gone it is a lot harder for new people to see them). These comments will help people who get floxed years from now.

After the comments and views are high. I will be emailing it to major news stations, talk shows, politicians, the FDA, and I recommend you send it to the doctor who rx you this poison.

Thank you everyone who had the courage to do a news story. I know how hard it was. And thank you to everyone behind the scenes who put them together.

This is my story of fluoroquinolone toxicity:

In July 2014, I was prescribed a ten day course Cipro for a urinary tract infection. I didn’t think much of it since I had taken this class of drugs in the past with no reaction. This time was different than before as I experienced a serious adverse reaction. I took Cipro for 7.5 days, and then discontinued taking the medication since my symptoms were becoming progressively worse.

The pain in my legs was so bad, I could barely walk. It was a pain that is hard to describe, but it felt like I was very stiff, and the pain was spreading. The stiffness in my legs turned to numbness, and my legs would tingle when touched. I felt like my legs were dying. I also had headaches, nausea, dizziness, sensitivity to light and pain in both Achilles. The doctors dismissed my issues and I was released and sent home with my parents. For the next 48 days I wasn’t sure if I was going to live. Within the first 24 hrs of leaving the hospital the numbness and tingling I felt begin to spread up to my legs to my hips, and then to my back and eventually spreading over my entire body. I experienced excruciating body-wide tendonitis and nerve pain – in my toes, feet, ankles, shooting up calves, lower back, ears, wrists, elbows, and hands. Everything felt like it was ripping and pulling. My entire body was swollen and stiff; my toes were so swollen that they curved downwards and would not return to a resting position. I was in severe pain, more pain than I could imagine was possible. Just to sit up in bed was difficult and agonizing. I was so weak I couldn’t lift a normal cup without feeling a strain on my wrist. On top of the pain I was dizzy, nauseated, light headed, feverish, and could feel every beat of my racing heart. I had burning sensations that felt as if a baseball on fire had landed on my legs, random twitching, extreme sensitivity to light (my family had to black out my windows), new floaters in my eyes, my ears were constantly ringing, my body would crack whenever I moved, and other symptoms. I lay in bed and cried as my body was unbearable to live in. I wasn’t even sure that I could make it. The only minimal relief I would get was when my family would lightly rub my body where I was hurting or just hold the area. My whole body was wrapped in ace bandages.

During these initial few months, my family and I did everything possible to detox my body. I went on an all organic diet and only ate food that decreased inflammation. I would also do contrast bathing, which was recommended by a podiatrist, to increase the blood flow in my tendons and ligaments.

In September 2014, two months after my ordeal began; the pain finally began to decrease. However, I would still experience random pains daily, including constant Achilles stiffness, and intractable exhaustion that made life difficult. The pain decreased enough that I thought I was going to be ok. I could live with the pain I was in.

For a few weeks I was actually able to see my friends, go to the store, and get a job. I was in the middle of a career transition when I got sick, and I had just received my Real Estate License. After starting my new job I had a relapse and went backwards. The pain increased and the fatigue became debilitating.

What I experienced is not normal fatigue. My fatigue feels like the energy is sucked right out of my body. I didn’t even know what fatigue was until this happened. I couldn’t even take a shower and blow-dry my hair without taking a nap in between. The daily low grade fevers, nausea, dizziness, exhaustion, weakness, and pains have left me totally disabled. I have not had a normal life for the past year. My mother has to be my full-time care taker. I am unable to cook for myself, go grocery shopping, drive to the doctors, do laundry, clean the house, or any normal activities. I used to love going to dinner with my friends, shopping, walking and hiking outdoors, working out, boating with my family; but Cipro has left me housebound. Without a full-time care-taker I would not be able to survive since I am unable to do the necessities to survive on my own.

My life consists of going to doctors, and trying to find something that will make me feel better. The Mayo Clinic diagnosed me with Chronic Fatigue Syndrome (recently renamed to Systematic Exertion Intolerance Disease), Fibromyalgia and Central Sensitization Syndrome. The Mayo Clinic had nothing that could assist me, and they suggested that I look into alternative medical treatments. I have tried all alternative medicine to get better including: acupuncture, infrared saunas, hyperbaric oxygen chambers, energy healing, neural therapy, electromagnetic beds, essential oils, a plethora of vitamins, and IV therapy including IV vitamins, IV ozone, IV H2O2. I have spent thousands of dollars with the hope of recovering from Cipro toxicity, but have not seen much relief at this point. The only items that I have noticed help my symptoms are IV therapies. All I can do is warn everyone I know about the dangers of Fluoroquinolone Antibiotics. Please do not take these drugs unless it is a last resort. Inform yourself, read the side effects, and ask for safer medications.

Hi there – 3 years ago I was put on Cipro for a UTI. I was also put on Levaquin & Bactrim for months. I had a hysterectomy & they had me on IV Cipro for a week. I was an active working mom of two, one with special needs. Now I am beat up from 3 years of tests, procedures, doctor appts, acupuncture, chiropractic. craniosacral therapy, nerve blocks, injections, meds. PT. surgeries & daily relentless chronic pain. Diagnosed with pudendal neuralgia, interstitial cystitis, sacroiliitis, vestibulitis & more. I reversed the severe fibromyalgia by following the Paleo Autoimmune Protocol. My diabetes also went away. Now I am told I must go on a low oxalate diet. I am taking magnesium, CoQ10 & nascent iodine, and probiotics. I am always overwhelmed but I fight on for my family. They need me. Thanks for listening 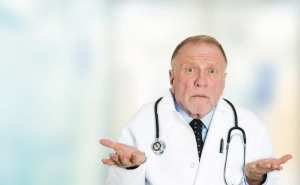 Pic from a google image search, not the actual doctor mentioned

Mr. MD,
I am addressing this letter to make you aware of the physical and mental nightmare I have been enduring on a daily basis since you prescribed me Levaquin (levofloxacin) for a simple urinary tract infection. The adverse drug reactions that I am suffering are sometimes so painful that crying has become natural. The joint pains throughout my body, constant headaches, and peripheral neuropathy (pins and needles, burning, electrical shocks) on my legs and arms, are sometimes unbearable.

What I find disturbing is the fact that on the follow up medical visit, you pretended to be surprised that I was experiencing these horrific side effects, and actually started to make excuses by alleging that I was suffering from rheumatic arthritis, and immediately tried to pawn me off to all kinds of other doctors. You also recommended for me to take NSAIDs, which later I found out is a big NO NO when someone has being exposed to fluoroquinolones.

On the second medical follow up appointment, when I confronted you with FDA documentation on Levaquin side effects, all you could do was scratch your head and continuously respond “I don’t know” to the questions I was asking in reference to my current physical disaster.

Another disturbing fact is that your office called me after the second follow up visit to tell me that I needed to go back, because you had forgotten to examine my joints. On the following week at your office, the entire medical examination consisted of you staring at my ankles for approximately 20 seconds and saying okay. Your office was also quick to file another insurance claim for that visit. Total time spend receiving medical attention from you and your office to include body weighing, blood pressure, and your consultation for all four office visits did not surpassed twenty minutes (excluding the time spend in the lobby waiting area).

I am embarrassed and upset at myself, for being so stupid in believing that all doctors are always looking out for the better health of their patients. After I had been poisoned by this antibiotic, it only took me about two minutes, to research on the internet all the horrific fluoroquinolones side effects that are affecting thousands of people on a daily basis. I am positive that you as a medical doctor may have better and more accurate access to the side effects statistics and devastating side effects of these antibiotics. If you would had advised me of the Levaquin possible side effects on February 23, 2015, I know for a fact I would have told you “NOOO, NEGATIVE” and asked you to prescribed me a penicillin based antibiotic.

Doctor, please take time to advice patients of the possible horrific side effects of these antibiotics, if you are still prescribing them.

As for me, my daily existence since the day after the last poison pill, has been a daily physical struggle, to which waking up in the mornings, is not a blessing anymore.

Doctor, I have no ill feelings towards you. I was just one of thousands of unlucky ones who have been poisoned by these demonic antibiotics. Ironically, I thank GOD that you did not prescribe me 750mg, instead of the 500mg, and or 10 pills instead of 5 pills.

I am okay in my heart; I hope you are okay too. I have faith in GOD, that one day; this whole nightmare will start to gradually ease off.

I realize now, it is greed and egoism what are controlling the fate of this world. The FDA, pharmaceutical companies and even some doctors, sole motivation is greed, and egoism with zero consideration towards human lives. Fluoroquinolones are devastating lives on a daily basis, but no one seems to care as long as the money keeps rolling in and they are not the ones getting poisoned by these antibiotics.