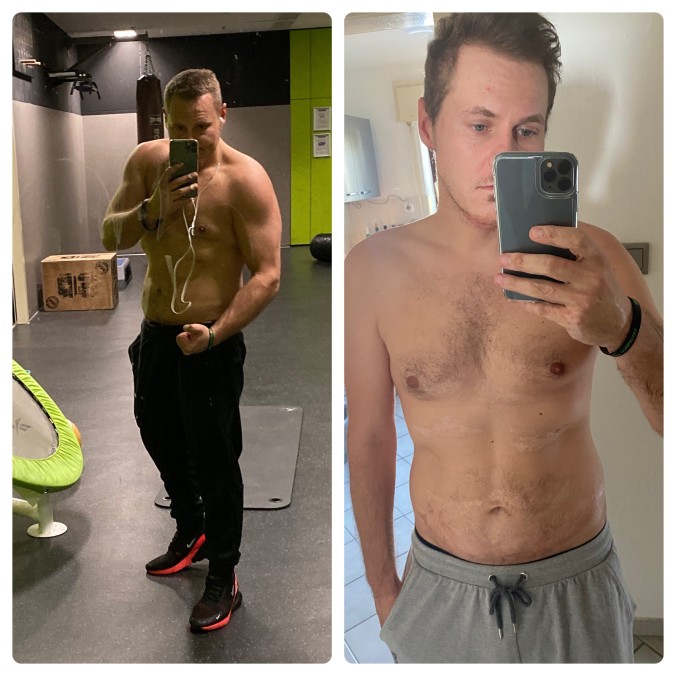 hello to all my name is Daniel,i am 33 years old and i am from germany.between the pictures of me is a time of 2 months and 24x ciprofloxacin tablets.this is my story…..

Before I got Cipro I was a trainer for self protection and had my own martial arts school.

I trained different martial arts for 15 years and was 5 times a week in the gym. my life was fulfilled, I rode my motorcycle and was a department manager in a big hardware store.

I had found my love of life and we were going to get married and start a family this year.

Everything changed this year on February 10th, 2020, my doctor prescribed 24 tablets of Ciprofloxacin without warning and destroying my entire life.

After taking the antibiotic for the first time, I had insomnia and burning hands, I didn’t know what was wrong with me so I went back to my doctor and described the symptoms I had recently, and his answer was that it wasn’t from the antibiotics, so keep taking them!

I kept on taking it and after the cure all hell broke loose and I turned from one day to the next into a zombie!

My tendons in my feet started cracking and jumping, my whole body was burning like fire, I could only sleep for one hour at night, my skin was getting flabby and my hair started to fall out and my teeth started to wobble, very severe depression and hallucinations, a feeling of dying.

I am now 9 months postflox and the symptoms continue and become more intense.

every day i wake up in hell with all body aches,intestinal problems,my skin is getting drier and drier.a feeling in my body like i am going to die soon.heart is racing,nausea,all tendons in my body are cracking and jumping,exhaustion.i am tired and can’t sleep because i am in fight or flight mode 24/7.my muscles all over my body are twitching and i have trouble breathing.my eyes are burning like fire.all my teeth are sore.

I wish to die with every day and I think a lot about suicide because nobody can help me.

I had a dna test that proved that my dna was damaged by Cipro, I can’t even begin to imagine a life like this.

My great love has left me, I lost my job and my martial arts school.

I lost my apartment and had to move back in with my parents!

Every minute now is a fight for survival and I don’t know how long I can stand it.

I do not know who I am and what happened!

I owe it all to a doctor who had no idea that Cipro is the biggest poison in the world.

In Germany this disease is not recognized and we are depicted as psycho.

I don’t know how much longer I’m going to take part in this but I wanted to leave something behind so that others don’t have the same fate as me and all of us who have lost their lives and health due to the big pharmaceutical industry.

Cipro is poison and these assholes know these risks and destroy lives for money.

See you soon or maybe goodbye

The story above is truthful, accurate and told to the best of the ability of the writer. It is not intended as medical advice. No person who submits his or her story, nor the people associated with Floxie Hope, diagnoses or treats any illness. The story above should not be substituted for professionally provided medical advice. Please consult your doctor before trying anything that has been mentioned in this story, or in any other story on this site. Please also note that people have varying responses to the treatments mentioned in each story. What helps one person may not help, and may even hurt, another person. It is important that you understand that supplements, IVs, essential oils, and all other treatments, effect people differently depending on the millions of variables that make each of us unique. Please use appropriate caution and prudence, and get professional medical advice.

Six years ago I was put on a 3 1/2 week therapy(seems so paradoxical to even use that word)of Cipro twice a day. I have been in medical sales all of my professional career and should have taken closer notice, that my legs were hurting me and should have stopped immediately. I took a generic so there is no recourse legally for the damage that was done.

I have never recovered, in fact, in many ways symptoms have grown worse. Post Cipro I was left with Peripheral Neuropathy in both feet, shins, calves, 24/7 365.

It is daily torture and difficult to live with(but its better than the alternative). I also deal with diffuse pain all over my body and no doctor can tell me the cause. I have Idopathic Peripheral Neuropathy(meaning, there is no known cause).

Each doctor I have seen, I tell them that I know that the Cipro was the culprit, to which, they look at me like I have two heads.

I have been examined, tested, leaving me again with no answer(s). I have tried Lyrica, Amytriptoline, Nortriptoline, Gapapentin, they only made me feel really spaced out, with no relief.

I have been through Electric Signal Therapy, Reif Lamp Therapy, Himalayan salt foot bathes(to leech out the toxins), also with no relief.

I visit a Restorative/Rehabilitative MD, who has had me follow various diets(Elimination Diet, Detoxing Diet, Mitochondrial Diet)and lots of supplements directed toward reducing toxins in my body, reducing inflamation, improve the daily torture. As of yet, nothing has helped.

I started several weeks ago LDN (low dose Naltrexone), which is supposed to help with the pain and discomfort. We shall see, the jury is still out.

I have been ingesting CBD Hemp Extract for over six months now, hoping that it will bring relief, but the jury is still out on this one as well.

For over 30 years I was a very serious recreational athlete. I have been around the earth’s circumference two times(52,000 miles)as a result of running the New York City Marathon, having done 12 Olympic Distance Triathlons, thousands upon thousands of miles road biking, roller blading in the street for distance, swimming, running races, as well as being a gym rat.

All of the recreation that I loved so dealy, was taken away from me. I have been so inactive that I have suffered a great degree of muscle wasting. I am attempting to get back some strength by doing Aqua Therapy(but everthing I do feels good for the moment and than I hurt even more). I know that you are supposed to be sore after exercising, but the aftermath, is more than just soreness. I have not gotten yet to a place, where I might not experience the aftermath, as significantly.

Radical exceptance is what I have been told I must embrass. I have to be thankful, for many people, have it far worse. Depression and Anxiety are always close by and without medications to help me with that, I would be far worse off.

Sitting in a chair with my feet on the floor is often times unbearable. I try to walk in spite of knowing that I am going to hurt more as a result, but one foot in front of the other is my only true option.

I try to remain hopeful, that one day, things will improve. It is very difficult to overcome feelings of hopelessness at times, but I fight that monster under my bed, to the best of my ability.

It amazes me that my local Pharmacy sells over 1200 Cipro a week and other than me, no one has been harmed, in the manner that I have.

To all of you who are in similar situations, my heart goes out to you. I pray that we will one day find some peace of mind, body and soul. For those that were harmed, but healed from the damage done, I could not be more thrilled for you.

I don’t want anyone who reads my story to feel hopeless as a result of doing so. My daugther gave birth six weeks ago to our first grand child Brooklyn(girl). We are expecting another grand child in October(a boy). After being terminated from my job of 34 years, and having 2016 as a year I would rather forget(but can’t) I landed a new job whihc I truly love. The CBD Hemp Extract has impacted my emotions in a positive way, so I do not find myself being overly negative.  There is hope to those who believe. As long as we have hope, great things are possible.

I will pray for all who suffer each and everyday, as a result of Big Pharma, caring only about how many more billions they can make, while ruining people’s lives.,

** The story above is truthful, accurate and told to the best of the ability of the writer. It is not intended as medical advice. No person who submits his or her story, nor the people associated with www.fqwallofpain.com, diagnoses or treats any illness. The story above should not be substituted for professionally provided medical advice. Please consult your doctor before trying anything that has been mentioned in this story, or in any other story on this site. Please also note that people have varying responses to the treatments mentioned in each story. What helps one person may not help, and may even hurt, another person. It is important that you understand that supplements, IVs, essential oils, and all other treatments, affect people differently depending on the millions of variables that make each of us unique. Please use appropriate caution and prudence, and get professional medical advice. 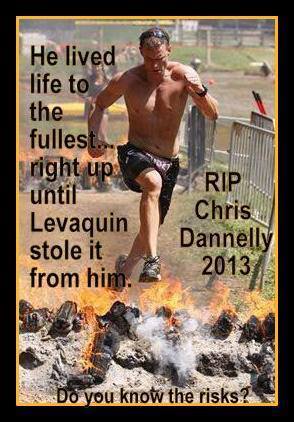 NOT to be used as a first line of defense.
Billion of dollars are spent every year on the damage these drugs cause ripping people lives apart.

Who Cares? Not Johnson and Johnson

In December 2012, the Dannelly family posed happily for their Christmas card photo blissfully unaware that it would be their last. One month later Levaquin changed their lives forever. Chris Dannelly (beloved husband and father), came down with a bad cold and went to see a doctor over the weekend. He was diagnosed with pneumonia and was given two pills of Levaquin. Unfortunately, he had an immediate adverse reaction to the fluoroquinolone antibiotics, and began experiencing excruciating limb pain.

Kathy Dannelly (Chris’s wife) took him to see their family physician the following Monday. At that time his doctor saw no sign of pneumonia, but it was too late, he had already taken two pills of Levaquin unnecessarily. The following day he had to be rushed to the emergency room at the John’s Creek, Georgia Emory location with increasing pain. They administered multiple doses of morphine to no avail…the pain never stopped.

Tragically, by Wednesday Chris coded and was charged 18 times in an attempt to save his life. He went into a coma and his death was officially called the following morning on January 17, 2013 at 8:15 am. After reviewing the autopsy report, doctors stated that “all signs point to Levaquin” as being the cause of death. Mr. Dannelly was survived by his loving wife Kathy of 12.5 years, his 7 year old son, and his 4 year old daughter. The last time his children saw him alive he was crying in a wheelchair in unbearable pain. END_OF_DOCUMENT_TOKEN_TO_BE_REPLACED